I just don’t know any more. Even a casual reader of this blog, one as casual as I am a writer of it, will know that I GODDAMN LOVE SUPERHERO MOVIES. They’re literally the best, Batman. But…but…

That’s just so many films. When DC announced their slate of movies in some shareholder meeting or a Forbes article or whatever it was, I said to myself: Cool, I look forward to Justice League and Shazam has The Rock, so that’s good, and also ugh Aquaman and Green Lantern.

However, I’ve always had a lot more love for the Lee/Kirby side of the fence, so when Marvel dropped the entire remaining Marvel Cinematic Universe release calendar I immediately memorised the order and what month and year they’re all due to come out. Because…because that’s important information.

But I look at that combined calendar above, with not just DCU and MCU movies but your X-Men and Fantastic Four titles from Fox and your increasingly terrible Spiderman franchise from Sony and I think: Am I really going to go to the cinema and watch TEN superhero movies in 2017? Even if one of them is Lego Batman? (Though Female Lead Spider-Man Spin-Off has always been one of my favourite comics.)

I suspect that come April 3rd 2020 we’ll all still be so full superhero-stuffed from ten months prior–having watched Avengers: Infinity War 2 AND Justice League 2 in the space of six weeks–that we’ll be at saturation point. “No thank you, Mr. Cyborg. I’m done. I couldn’t eat another bite. Even if it is wafer-thin. And if you think I’m watching another Green Lantern movie you’re more gullible than those people who thought Marvel would actually kill off Chris Hemsworth and replace him with a female Thor”.

Still, Age of Ultron looks badass. Definitely excited about that.

A bold claim, as reported in io9. The company’s own website has more detail including a compelling timeline that has fusion powering small cities in fifteen years and providing inexpensive power to the developing world in twenty.

This is a development worth keeping an eye on, as io9 point out:

Harnessing fusion has been the Holy Grail of physics, a game-changing solution that could provide a virtually unlimited source of cheap energy.

LM also rolled out this cheery guy to explain what the heck nuclear fusion is in case anyone’s forgotten.

I’m disappointed that only the intro had a dramatic dubstep soundtrack, though.

Scribd. Never heard of it? Nor had I until a few days ago. For $8.99 per month you get allegedly unlimited access to allegedly over 400,000 books–which sounds like a heck of a bargain if you read even just a few books a month. You can also buy books outright, if you want to keep them.

Anyway. Thanks to the fabulous folks at Draft2Digital–the distributors through which my books reach iTunes and Barnes and Noble–both Ascension Point and Venus Rising are live on the site. Payment terms are pretty reasonable: the author gets paid for any sale as you’d expect, but also for any subscription read where the reader got past the 30% mark. Which is pretty neat. They even count ten 10-30% reads as one sale too, which is a little bonus.

Plus, the Scribd site is SWANK. 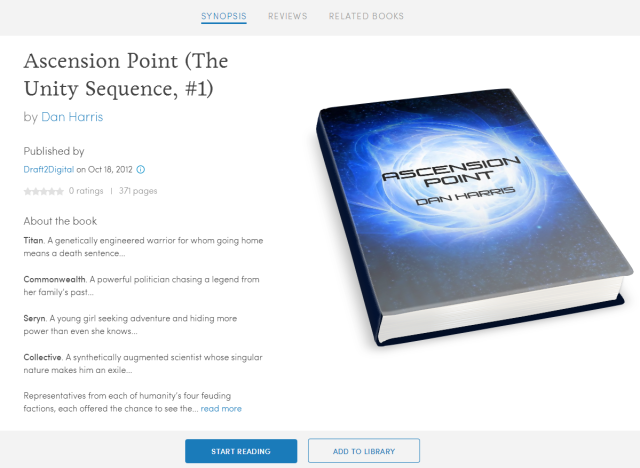 Just look at that. Mmm. Shiny.

I’ve added Scribd to the store links for both books in the bar on the left, so head on over and check it out.

So busy. So, so busy. Still writing, albeit not as much as I want. Only 10-15K words still to come to complete a draft of Causal Nexus. Getting there. Bear with me. Stay strong, people!

On June 12, 2014 By Dan HarrisIn Sci-Fi and Fantasy, WritingLeave a comment

Ah, The CW. Bizarrely-named TV network, home of Dan and Mrs. Dan’s cheesy favourites The Vampire Diaries and its Bayou-based spinoff The Originals. Mrs. Dan also watches Reign, the Mary Queen of Scots historical soap where apparently everyone’s speaking French but it’s in English and it’s set in Scotland but who cares they have nice outfits.

I’ve got off topic.

The CW. Right. Where every commercial break is home to at least one trailer for another show on the network, from the excruciatingly titled The Tomorrow People to ‘how is this show still going’ Supernatural. And, of course, Arrow, based on the somewhat famous DC comics character, Green Arrow.

Based on the clips I’d seen, it looked pretty mediocre. Probably kind of fun and fairly entertaining, but hey – there’s a lot of TV to watch and only so much time. But then I started coming across extremely positive reviews of episodes in the current (or rather, just finished) season two, and it seemed like it was time to give it a shot.

So I slowly worked my way through season one, and it was indeed kind of fun, quite uneven, some good episodes, some pretty bad, but still solid TV. Enough to make me want to stick with it for season two.

Which I just watched in a week.

Holy crap did it get good. I don’t know what changed behind the scenes, or if it was just a case of the writers hitting their stride, but season two starts strong and only gets better. The second half of the season is probably the most consistently excellent TV I’ve seen from a show that isn’t one of the critics’ darlings (Game of Thrones, Mad Men, Breaking Bad, The Americans). Well paced, exciting, funny, believable characterisation, explosions, people in masks beating the crap out of each other–what more could you want?

It’s been fifteen years since the Wachowskis made a truly great film. Fingers and toes crossed that this one turns out to be as good as it looks! (But remember, The Matrix Revolutions had great trailers, too. Ugh.) The Tatum/Kunis/Bean combo is very promising, though.

From the streets of Chicago to the far-flung galaxies whirling through space, this film tells the story of Jupiter Jones, who was born under a night sky, with signs predicting she was destined for great things. Now grown, Jupiter dreams of the stars but wakes up to the cold reality of a job cleaning other people’s houses and an endless run of bad breaks. Only when Caine, a genetically engineered ex-military hunter, arrives on Earth to track her down does Jupiter begin to glimpse the fate that has been waiting for her all along-her genetic signature marks her as next in line for an extraordinary inheritance that could alter the balance of the cosmos.

If this doesn’t end up being the greatest superhero movie ever, then I’ll eat Magneto’s hat.

Looking good. And in a trailer otherwise full of quick jump cuts between action scenes, it’s nice to see they took the time to spend a full four seconds on Black Widow walking away from the camera. As if the average guy in the 18-35 demo wasn’t already going to see the movie.

Meanwhile, Tor are disappointed that the upcoming Terminator reboot is going to, well, be a reboot, which doesn’t fit with the ontological paradox set up in the existing canon. I might also care about this, but it’s the end of a long week and half way through reading the article I decided to have a beer instead. (Of caring. I did finish the article. And now I need to go and research what a Nokikov self-consistency principle is.)

Surprising no-one, 300: Rise of an Empire may not be great, based on the scathingly sarcastic review over at io9.

As I’ve mentioned in these pages before, when it comes to the ‘plotting vs. pantsing‘ debate I fall firmly into the former camp. I wouldn’t dream of starting the first draft of a book without having a well-defined outline of the high level plot, chapters to get from A to Z, and even the scenes that make up those chapters. I just don’t know where I’m going otherwise.

So when it came to starting work on my current WIP–Causal Nexus, which will be the third book in the Unity Sequence–the first thing I did was build that outline. Start to finish, all the characters, all the arcs, all done and ready to draft.

Or so I thought.

I started writing, and the first few chapters came with ease. Then, as I neared the end of part one (of three) I started to slow down. The words weren’t coming so easily, and I found I just wasn’t sitting down to write as much as I should be. For a while I assumed it was just life getting in the way; work being busy, too much other ‘stuff’ that needed doing, etc.

But then a couple of weeks ago I went to a work conference, where several colleagues who have read my first two books accosted me–in a friendly way–and demanded to know when the third one was coming out, because they were tired of waiting for it. Which is obviously a very nice thing to hear, and gave me a kick up the backside.

The day after I got home I fired up Scrivener and spent an hour poring over what I’d written so far, the character bios, the outline, the– wait, the outline. I realised that what I’d thought was a very well-defined incident at the start of act two, which kicks off the sequence of events that drives the story through to the end of the book, was in fact not very well-defined at all. Was damn near woolly, in fact. Vague.

I’m not sure how that happened; I can only assume I was in a rush to get down all the other exciting stuff that happens after that point. But regardless, I rolled up my sleeves and fixed it. Nailed those few scenes down so they made sense, flowed, and tied into other plot points both earlier and later in the story.

And what do you know? Now I’m back to full speed again. Seems that my being sub- or unconsciously aware that I didn’t-quite-100-per-cent-totally know where I was going next was making me tentative about getting to that point. Once I did–boom. Away I went.

The moral of the story here, my plotter friends, is that if you ever find your writing trundling along at less than your normal place, or worse, stalling entirely, take a good hard look at your outline. It might be a bit more… ‘pantsy’, shall we say, than you thought.