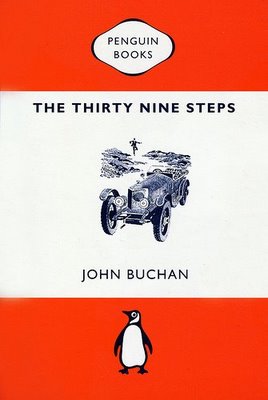 I picked this up yesterday for the Kindle, for some ridiculously low price.

I must have read the book ten times when I was a boy – it came in one of those enormous compendiums of Penguin classic novels, along with Treasure Island, Robinson Crusoe, The Casebook of Sherlock Holmes, and about fifteen others.

I read them all, but for some reason The Thirty Nine Steps was my favourite. It might have been partly because it was my first introduction to the world of ‘spy stuff’, before I’d even sat down to watch a Christmas Day repeat of an old James Bond movie.

But having ploughed through it yesterday (it’s not a long novel, at 120-odd pages) for the first time since I was in high school, and with a more a literary eye, I think it’s just that it’s a superbly written novel. Each of the first seven chapters is based around an introduction to a new character along the protagonist Richard Hannay’s journey to thwart the villainous Black Stone. Buchan’s characterisation is quick but wonderfully deft, managing to round out the newcomers in just a few paragraphs before skilfully using them to progress the plot – which barrels along at a tremendous pace.

The last few chapters crank up the tension superbly, before the final gripping climax which somehow still manages to excite on the eleventh read.

As with Conan Doyle and other early 20th-century writers, it’s necessary to put aside the modern reader’s distaste for the very occasional use of epithets that have been considered racist for decades – but these aren’t used with malice or prejudice. And they don’t detract from what’s still a marvellous read, almost a hundred years after it first appeared.